Rachel M. Harper’s “The Myth of Music” weaves together a narrative of a childhood and of a cultural heritage as a whole ─ how music was and is entwined with black history and every aspect of the speaker’s life. Detailed metaphors of various musical tools and elements create the elaborate memory of a musically enhanced childhood. Furthermore, the combination of such images or metaphors with more specific anecdotes or memories creates a poem with a form of continuous time and music ─ one that binds memory and music together.

The tone, ranging from bittersweet, reflective, and resolute, ultimately illustrates the combined impact of the speaker’s memories and of music, through both long and abrupt sentence structure. The poem begins with lengthy descriptions of musical tools, utilizing metaphors to create imagery that convinces readers of the deep connection between the speaker’s familial memories and music. In line 4–“lineage traced/through a title track,/ displayed on an album cover/ that you pin to the wall …”–the image of a tracklist compares to events or progressions of the speaker’s black history. Furthermore, the image of the album cover represents major developments in both the speaker’s personal life and black heritage as a whole; the cover is a symbol of pride or “art” or even a watershed event in black heritage. Clearly, as jazz and the blues have been a vital piece of black culture and development, creative black work, be it music or otherwise, would have an extreme impact on the speaker’s childhood memories. This is emphasized in line 16, a strong, warm memory that “… [was] the definition/of family, collective memory cut in rough-textured tones,/ voice of the horn so familiar . . . .” This metaphor of how music “was” the speaker’s family and that musical tools were the tools of that family’s expression or communication weaves music into the speaker’s memory. This combines the fragility or background prevalence of music with a distant feeling in the speaker’s past, making the relationship between music and memories of family reflective of a collective black experience as a whole.

The form of “the Myth of Music” consists of musical metaphors coupled with memories of indefinite time. Often, it is unclear if the speaker is remembering a single memory or a recurrence of a commonplace event, making the impression that music was an integrated part of familial interactions. In one such “event’, the speaker describes the “warmth/ of a radiator on my back and you/ present in the sound of typing your own accompaniment;/ multiphonics disguised as chords … to fill the whole house ….” This displays a warmly pervasive presence of music in a timeless past, making the form of the poem that combined timeless anecdote with equally timeless musical metaphor one that could deftly illustrate the music echoing in the background of each of the memories or the speaker’s current mind.

Ultimately, the poem demonstrates how music blends with the speaker’s memories of family with the establishment of a complex, pervasive tone of bittersweetness, reflection, and resolution. The bittersweetness of tone is seen in line 27, with the description of the mother’s distance from the family. In this paragraph, long, drawn-out sentences describe the loss of the mother’s presence as well as the comfort of music in the house ─ the loss of music was equivalent to the pain of losing the mother. Similar long sentences in lines 41-47, describe how “…jazz [was]/ too personal to play out loud” and that music was “locked to the rhythm of her childhood …/ coming to life in a saxophone’s blow.” The tone, reflecting on the finiteness of that pleasant past, is pensive and once again bittersweet, with powerful words such as “locked,” and “fading” exemplifying the speaker’s willingness to cling to the precious memories of both music and family. Still, the speaker’s last words are deeply resolute, ending in an abrupt sentence that declare that the speaker “will not share this air/ with anyone/ but you.” The relationship of music and memories is something deeply embedded in the speaker’s identity, and was one thing that gave the speaker strength. With this, the speaker grasps her memory of the entwined nature between music and memory, and declares it as part of her very being. 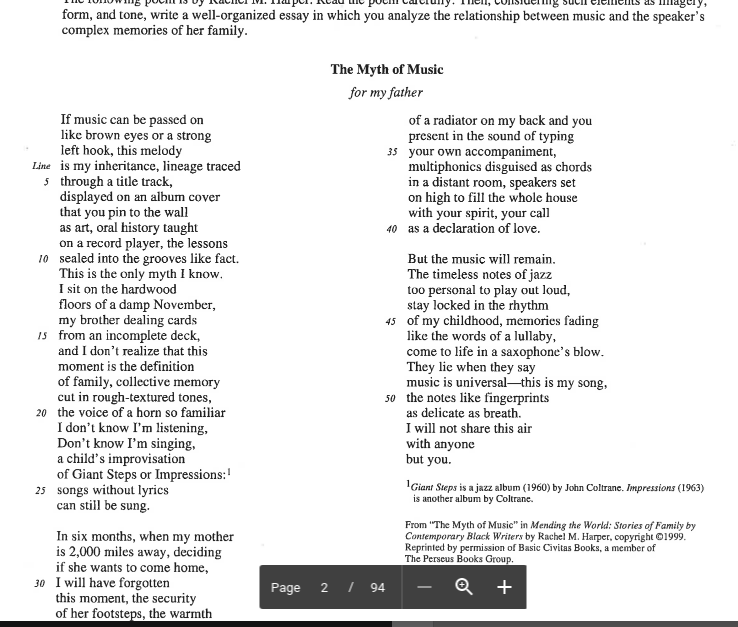 Here’s what the AP scorers had to say about this essay:

More samples from this particular question are available here.