In this passage from The Adventures of Peregrine Pickle, an 18th century work by Tobias Smollet, Mr. Pickle happens on an encounter with the soldier Godfrey Gauntlet, who wishes to know about Mr. Pickle’s relationship with his sister. This culminates in tense emotions firing between the pair of them and a physical duel, yet all the while Smollet shows how such tension and emotions were in part kept in check by an element of honor, dignity, and respect that was expected from two men as per the social norms of the time.

Smollett makes clear the hostile nature of confrontation between the two men, as tensions and anger between the two flare, with fiery exchanges shot back and forth. Mr. Pickle, upon confrontation by Mr. Gauntlet, immediately retorts with an effrontery targeted towards his social standing and lack of wealth ─ instead of answering Mr. Gauntlet’s question, he responds by asking “what title [Mr. Gauntlet] has” (4-5) to demand an answer of him. Mr. Pickle later makes a similar remark, targeting his social standing, as he “looks contemptuously at [Mr. Gauntlet’s] equipage” (21) and scoffs at calling himself a gentleman. Mr. Gauntlet also thinks himself superior to Mr. Pickle, saying that he would act “to chastise [anyone] if [he] thinks he acts amiss” (15-16). Moreover, when Mr. Gauntlet was made to feel “conscious [of his] poverty” (25-26) when he was mocked by Mr. Pickle, his “wrath was inflamed” (24) and called him a variety of names, from “presumptuous boy” to “insolent upstart” (27), before challenging him to
a duel. The rapid pace at which their encounter proceeds is indicative of the high-tension emotions that fierily are on display during their conflict, which proceeds from a polite, respectful greeting, to action at the sword in a matter of lines. Thus, by highlighting the personal relationship between to the two men (ie one being the brother of another’s beloved), Smollett demonstrates the conflict that exists between the two men.

Yet this passage also takes into account the role of societal norms and expectations, from chivalrous values such as honor and dignity to the foundation of their insults on social hierarchy─ this illustrates the idea that even though tensions in this conflict are running high between the two individuals, the idea of social norms holds them in check and keeps them focused on maintaining these standards. As aforementioned, many of Mr. Pickle’s insults are based on the poverty and poor appearance of Mr. Gauntlet, which he believes does not befit a gentleman. The fact that his insults are targeted towards the social standing of his opponent illustrates the high priority that this maintenance of social hierarchy is for him. Moreover, instead of proceeding to blows and lowly insults, they continue to address each other as “Sir” (4, 5, 9, 13), which serves to illustrate how even with such conflict, both parties strive to maintain the sense of dignity and honor associated with being gentlemen. Again, the fact that Mr. Gauntlet insults Mr. Pickle by calling him a “presumptuous boy” (27), causing him to “retort with great bitterness” (28), serves to show that the insults are again aimed at the social standing and honor of the opponent. Ironically despite the two gentlemen bitterly despising each other, they choose to resolve their struggle through “a formal challenge” (29). The formality of the duel shows what a large role social standards play in their lives, as instead of proceeding to blows, they opt for a formal, respectable conflict. Ironically again, even as they are preparing themselves for the fight, they “helped to pull off each other’s boots” (32-33), as treating with respect and honor was a high priority for them, even if it was helping someone you hated and were just about to fight in the coming minutes. Mr. Gauntlet insults Mr. Pickle’s swordplay abilities, and he offers a pistol fight, but Mr. Pickle “was too confident of his own skill to relish the other’s proposal (40-41); thus, even though he may have a better chance with different weapons, he refuses the opportunity on account of his honor. During the fight itself, Mr. Pickle received a blow from the sword. Although “the wound was superficial, he was transported with rage at the sight of his own blood” (49-51). Mr. Pickle is thus less worried about the fact that he could be hurt by such wounds, and instead is angry because he believes that Mr. Gauntlet has shamed his honor by making him look bad. Finally when the soldier Mr. Gauntlet claims victory, he insults Mr. Pickle’s blade to insult his honor, and then advises “the owner to treat a gentleman in distress with more respect” (62-63). What is amusing and ironic about this conclusion to the encounter between the two is that the conflict started on account of Mr. Gauntlet’s sister, but he was never informed by Mr. Pickle of their relationship as he had desired to know, despite why. What began as a conflict over a genuine cause turned and escalated into a conflict over honor and dignity of the two men. Thus, this illustrates that while many may view the conflict of relationship as more important, the two men were more concerned about the dishonor, highlighting the indispensable influence of social norms on their beliefs and actions.

Although the conflict between Mr. Pickle and Mr. Gauntlet began as a confrontation over a relationship with Godfrey Gauntlet’s sister, tensions between the two inflamed due to their insults directed at honor and dignity of the men. They resolved their disagreements with a formal duel, yet the respect they treated each other with and the evolving nature of their conflict to be more centered on their social standings and honor serves to illustrate the deep underlying influence of social norm and its predisposition on emotions and other aspects of daily life during this time period. 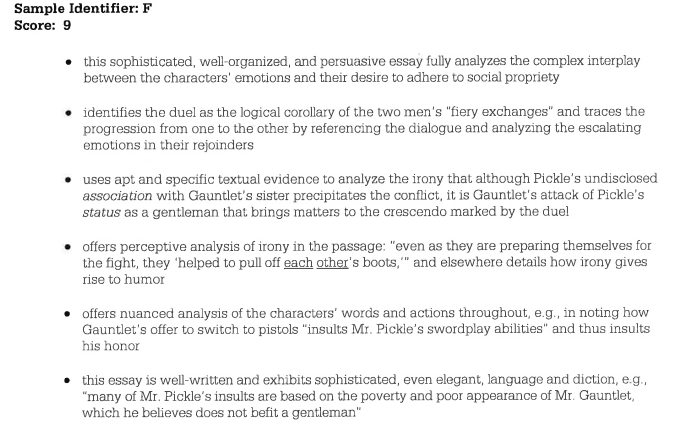